‘Tis the season for pumpkin! From jack-o’-lanterns on neighbors’ doorsteps to sugar pumpkins at your local grocery store, it’s easy to embrace this ubiquitous orange squash.

This week we celebrate the pumpkin with five recipes designed to make the most of them. You start by roasting a couple of pumpkins. Stuff and eat one for Sunday supper, then use the creamy innards of the other all week long for stew, cookies, and one-pot pumpkin pasta.

Winter squashes, like butternut, kabocha, acorn, and delicata, fall into the category of foods that are super versatile and always handy to have around. Sure, they’ll keep for a while sitting in a dark corner on your countertop, but there’s a much better way to put them to use — even when you don’t have any specific recipes in mind.

Roast a batch (or two) of your favorite kind of squash over the weekend, and you’ll be amazed at all the ways you can use it in meals, from breakfast through dinner, all week long.

In the Almond vs. Cow Milk Debate, the Fight Is All Wrong

That Wild Salmon You Order Might Not Actually Be Wild

This Map Shows Your State’s Favorite Halloween Candy. Is It Accurate?

The World Health Organization Has Bad News for Bacon Lovers

The Most Expensive Cracker in the World Costs $23,000

Pizza Is the Most Addictive Food, According to Science

Congratulations! You have completed The Kitchn’s Baking School! What an exhilarating, sugar-filled month it has been. Surely your fridge and freezer are packed with sweet goodies, or you’ve made some awesome new friends and are now the best neighbor ever after having shared all your amazing creations over the weeks. Most of all — you should be so proud of yourselves (insert happy dance around your kitchen)! We did it!

Before you officially graduate, here is your final project: We’re putting together many of the things you learned along the way in the creation of one spectacular layer cake. Are you ready for your final trophy?

Does anyone remember Garbage Pail Kids? Can I go predictably off-course here and admit, as I just did to my husband, who is now cracking up, that I was kind of scared of them when they came out? It was 1985! I was young! I was super into Cabbage Patch Kids and definitely did not have a grasp of parody and was this… something that could happen to a Cabbage Patch Kid? I mean, was it going to happen to mine? Why did everyone find them so funny? Ahem, right, so of course I now find them dark and brilliant, which should be no surprise given that they were co-invented by Art Spiegelman, something I learned exactly five minutes ago from Wikipedia but will now pretend I knew all along. 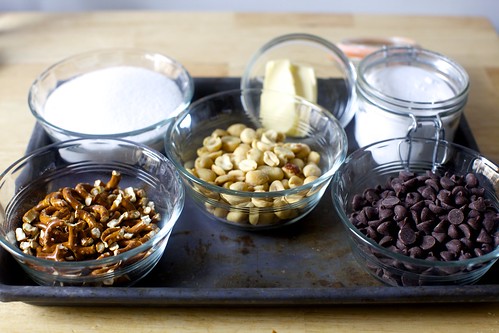 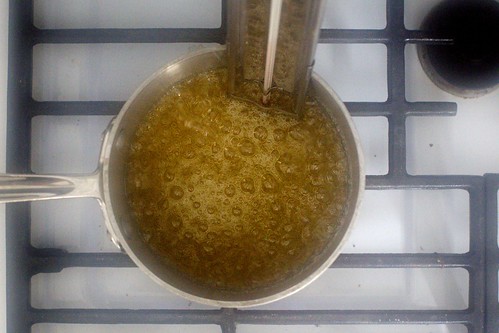 I bet you’re thinking, as per usual, “What on earth does this have to do with cooking, Deb? Focus, please!” But what I’d wanted to tell you is that for nearly eight years now, I’ve an item on my Halloween To-Cook List called “Garbage Pail Brittle,” which I’d hoped would invoke the chaos of the cards but in a less haunting to elementary school kids format. My theory was that, sure, peanut, almond and fancy seed brittles are lovely and elegant, but you know what would be even more awesome? Rice crispies. Potato chips. Pretzels. Because everyone knows that salt, crispy snacky stuff is aces against caramel, butter and chocolate. 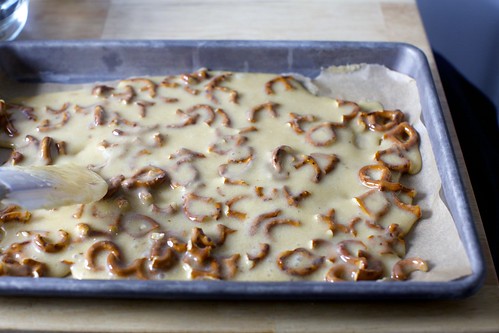 … Read the rest of chocolate peanut and pretzel brittle on smittenkitchen.com

The day before Halloween calls for a slightly spooky look at interior design. Yes, we love colorful kitchens, but there’s also something infinitely appealing about kitchens done almost entirely in black. Here are 10 of our favorite dramatic black kitchens.

I cannot leave well enough alone. As soon as I think I’ve found my chocolate chip cookie recipe, another one saunters across my computer screen singing its siren song. It drives my husband crazy, because the only recipe he wants is from his Alpha-Bakery cookbook (circa 1987). But I need more excitement in the baked goods department, which is how these voluptuous pumpkin oatmeal chocolate chip cookies found their way into my life.

It’s a special occasion (or just a random Tuesday), and you are looking for a way to celebrate. We have just the thing: cake. A gorgeous, mouth-watering, decorated layer cake, to be exact!

Have you just baked up your favorite cake recipe, made a batch of frosting, and don’t know what to do next? It’s time to learn how to stack and decorate cakes like a pro and start creating sky-high, sugar-filled masterpieces! “So simple and quick to make, these delicious knots of herb-seasoned bread will do well to complete just about any meal. Or eat these tasty knots as a snack between meals, with your favorite spread slathered on! Using fresh rosemary makes these knots especially fragrant.”